I was the oldest child, an oldest son. I’ve been accused of the things that come along with pecking order- the biggest piece of the candy bar, you name it. I never reconciled through the politics of birth order until my third son, Sam was born. That made my second son, Forrest, a middle child. I watched those boys play and began to identify with my sister- the middle child between two boys. I always got a bigger leg hug from Forrest. He would pull away from the pack to “check” on me, even as a little guy. Then, later on my fourth son, Elias, was born and before I knew it I had two middle children- these are my hunter-fishermen.

Sam and Forrest are my hunter-fishermen, in best reckoning because they need time with their “Papa”- a middle child thing. The youngest is too young. The oldest boy is too independent and driven towards his own goals. Those middle boys just want time.

When I was a teenager, an old friend of mind had a gas-station bumper sticker stuck to the inside of his truck bed. “Take Your Boy Huntin’- or Forever be Huntin’ Your Boy”- it said. Those words always impressed me. Growing up with a hard working dad, in an urbanspawl suburb of Charlotte- sometimes the hunting and fishing was more about stories and occasional trip to a hard to find dove field than all the stories he told of his youth. My dad tagged in behind my grandpa all over the county. Back when it still had land and farms. They had quail and rabbits. They knew all the dairy farmers and could cross about any barbed wire fence in the county with permission.

I came about hunting through an outlier- a best friend with a couple hundred acres of heirloom land at the edge of town. I guess going to the “AG” state college didn’t hurt or an odd love for Lynyrd Skynyrd and the resonating words of “Country Boy Can Survive” as a soundtrack to my teenage years. I mostly wanted what my dad had growing up.

I’ve dragged my middle boys along to hunt since they were little. Turkey blinds and deer stands. Dove fields and the banks of trout streams. Surf rods and salt marshes. I took them deer hunting on evenings I had no intention of shooting- too worried I might have to skin an animal late into the night and be too tired for work in the morning. They could see deer that I couldn’t spot with binoculars and begged me to shoot. In the beginning, they seemed to be in it for the bags of M&Ms and Skittles. It seemed so peculiar when they began to ask to go. They began to ask to go on days I wasn’t planning to go. They somehow knew the day rifle deer season opened- the way kids these days know things, a Google search. And they fought. They fought the night before because they were convinced that our double stand was going to be the best in the morning- how these boys know these things?

I shot my first deer in Northhampton County when I was eighteen years old with a borrowed .243 Winchester. It was a button buck. I was told that I should only fire at non-antlered deer at an uncle’s hunt club and was a bit castigated for shooting the inchoate buck. I went on to climb up the chain- a spike, a four, a six pointer, and eventually a decent eight point branch buck. I’ve shot a few eight point bucks, each time a little bigger- nothing ever a braggin’ trophy- always does in between for meat at the end of the season. I’ve been known to spend a week at the plantation hunt club only taking hogs, simply because I’ve never shot a buck smaller than the one I took last. So I was pretty sure that Forrest could shoot- pending the simple rule that if a six pointer or less came in, he could have it. If an eight pointer nineteen inches or better came in, he was my shot. Convinced that the boy would never be inured with his first take being a trophy, these were the rules.

Forrest took my wife’s place in our bed and she took his bed upstairs to avoid waking to our clunking around.  It was going to be a warm day, but the warmest days in November still start out cold. I have always taken my boys hunting in the afternoon. I had no idea how excited he would be- or how slow he would be getting dressed in a all those layers
quietly in our garage that morning. My goal was to get in the stand forty-five minutes before sun up. We left the house, ten minutes away from the farm,  at about that time. When I arrived at the farm, my hunting buddy had his truck parked up by the barn. We have a nice double “leaner” stand about two hundred yards from the barn. I could see a flash light in it. My old hunting buddy, Eddie, is getting a little older. He is a little less likely to take a long walk into the woods. His text simply said, “saw you pull up… didn’t figure you were coming… I’m in the double stand… the tripod behind the pond is pretty good.” So we started walking. I had that disappointed feeling about being late. I had that disappointed feeling about sharing a skinny cold open turret with my fidgety ten year old. I wanted this to be his day.

We walked about a quarter mile to our stand. Down the hill as light came in- way late by my standards. Forrest did his best, but clunked up the rungs. I passed the rifle through and asked him to stand behind the swiveling chair as I got in. Minutes passed and I could tell already it was going to be a long day for the boy. I would offer him my seat- but didn’t see much use in standing as far as hunting goes. We sat for a bit more- maybe ten minutes or so, then in the “just like that” that is deer hunting- a grey shadow moved in from the edge of the pines. It tip-toed silently forward out about thirty yards and stopped at the edge of a patch of broomsedge. I glassed him with binoculars- I saw a few tines, figured it was a nice big bodied spike. That was his deer. We had sort of rehearsed how he would shoot from that spot behind me, standing. We only reconciled that it wouldn’t work- but this was the one. I curled in to the floor of the stand as quietly as I could. From the best I could make of the deer through the camo screen, he didn’t see me move. I asked Forrest to get into the seat as quietly as I. He brought my 7mm-.08 to the rail and I asked him if he was ready. He was and I reached up to take off the safety. I couldn’t see. Only the flash of the muzzle in the twilight before I could give him encouragement. I heard the deer thrash off.

The sun rose and I sat there watching my son smile. After a half an hour a pod of does came in followed by a small six point buck. I sat and wondered if he had hit his mark. It was hard to let the present deer pass having that empty feeling that he put a bullet in the dirt. When the deer passed I took a moment to speak. “I shot him right where you are supposed to dad”, is all he said. A hundred yards away, another young buck thrashed and scraped small trees behind the pond. Then another small buck came in and they fought a bit. I still doubted. I wanted him to shoot again- but waited. I put my phone camera up against my binoculars and filmed them. So many times this has been my “proof” when choosing to pass on deer.

We saw deer, lots of them almost twenty total that morning, then it got warm and they stopped moving. When we got down from the stand- Eddie was coming around in his truck. Seemed that the world had come alive- first that world of animals. The birds moving, then squirrels and deer. Then the sun fully rose and the stealth was broken. The truck came right to the legs of the stand and Forrest plopped right into the bed- in one of those acrobatic moves only a ten year old can do. “Boy did you shoot?” was all Eddie said and Forrest, my shy one, smiled.

We walked out to the rough, high grass where the deer once stood. There was no sign of blood trail. We walked out a few hundred yards in a strafing fan through the cut where he my have run off. I second guessed my choice not to let the boy shoot again. We saw nothing. We walked back to the place where we began. I walked out to the side, Forrest went down the hill. As we reached the edge of thin trees, just behind the pond over a barbed wire fence, Eddie said, “I think I see something in here”. 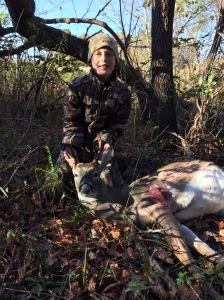 When I crossed into the layer of trees, Forrest was tugging at a deer that was bigger than him. It’s basketball sized rack had six little points. He was smiling and tugging. A rich crimson was bubbling from its torso. “Dad, I shot him right where you told me too.”

We pulled the deer into the beams of the barn with a gambrel hooked to my truck. We dressed him together. Forrest held the deer’s heart in his hands while I removed the last of his skin.

This morning, a week later, Forrest made chili. You see, nobody in my family really seems to pay attention to me cooking- which is my number one happy place- except Forrest always seems to be in that kitchen with me- talking and watching. Talking to me like a middle child does when everyone else is off doing their own thing. And he knew how to cook up that chili just fine on his own.

One thought on “A Morning with Forrest”