When I was a senior in high school, I learned to fly fish with my dad in the mountains of North Carolina. We had a place up on Beech Mountain and I guess because A River Runs Through It just came out we had to do what every white guy it America was doing- big goofy vest, brimmed hat, a cigar, the whole thing. By the time I graduated from college, I was a pretty decent wading angler, I had a mean little roll cast, a clean drift, and a DeLorme map that was marked up with lots of secret spots- was on the water about 50 days a year. I went off to dental school for awhile and my love for fishing grew, but my chances to go got more and more narrow. I spent a whole lot more time on the tying bench and reading magazines about fishing than I actually went- I was on the water about 12-15 days a year. At that point I thought I knew everything. I had kids (four of them, boys but a little too short to wade yet). I fished about 8-9 times a year. The rivers were getting more and more “Posted” signs, my marked up map wasn’t that hot anymore. It was time I needed a guide.

I met my friend Snapper when I was in my early thirties and he was in his early twenties. I had a pretty big ego about fishing and figured I might just have to let go of just a little bit of that to have a young guy show me where to go and frankly row the boat while I caught some fish. I began learning really fast I had a lot I could learn from this confident young buck. I was on a two day trip with six guys from my hometown booked with Elk River Outfitters (many of the guys went to High School with the outfit’s owner Judson Conway). So I got put in the boat with “Snapper”. “Damn”, I thought, “Snapper, if their own crew makes fun of this guy. . .”. He had the name because he snapped all the rods Judson gave him to fish with in half. I figured he would just be rowing the boat. And then I saw him cast and I knew I had a a lot of room to grow. And then he talked to me about how I should approach a fish and I realized I had a lot of room to grow.

We were floating the South Holston River one Sunday afternoon and he wasn’t looking so well. After awhile he finally let on that he wasn’t feeling so well. Finally, he came out and said that he felt like he had a fever because his wisdom teeth were coming in. So at about eleven o’clock on a Sunday night, three hours away at my office- along with my fishing partner- we pulled those buggers. Needless to say that is the story that put us together. I began to fish with him anytime I could when time allowed. We spent plenty of time laughing in the truck on those rides over the mountains. I’ll never forget the time I asked him if had ever seen any bears- he responded: “hell, everyday in Alaska, but never here”. At the moment he uttered the word “here” a big ole black bear barreled out of the woods and he slid his truck right into him. (There was hair in the front license plate- but we chased him off into the woods- no bear was harmed!)
He put in effort that he didn’t have to. He made the long day in the cold rain longer and rowed up a back eddies where guides only go when they are fishing with friends. He fished to dark on days when the fish weren’t biting and he had a date waiting- just for that chance to catch one. He would push that pole into the brackish mud without breaking into a sweat on days I lazily flopped on the bow deck dehydrated- never complained. 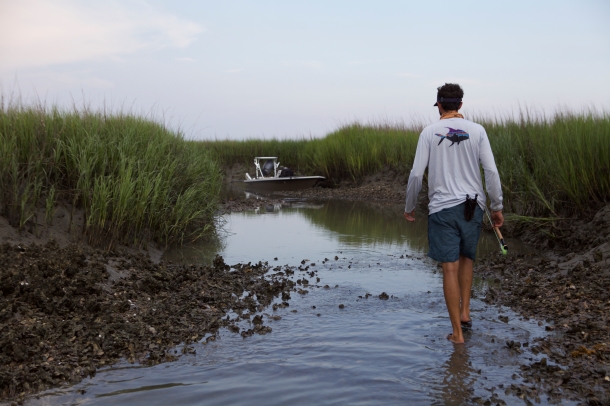 Capt. Evan flip-flopping through the oysters on the hottest day of the summer. 2014.

This really isn’t a writing about Snapper and fishing. It is about character, personality, and values. I am a dentist. It’s a damn hard job. It’s not a hard job because the technical parts of providing the medicine. I believe I am a proficient expert in what I do, much like Snapper was an expert professional fisherman. It is a damn hard job, I have learned through the years, because of the interpersonal traits required. You have to be patient. You have to teach effectively. You have to engage. You have to guide.

There is so much I learned about how to be a better person and better at what I do from the qualities I saw when I spend days with Snapper. He was incredibly patient and put my learning experience and happiness ahead of anything he was doing or thinking. He was always in the moment and fully present. He was an incredible listener. He taught you how to be a better angler and a happier person by listening. Snapper had every reason to be boastful. He was a big ole handsome dude- he could out fish everybody in the river and had every reason to let his ego be a liability- but he was humble. He was the Ultimate Guide.

Sometimes my days are too busy to rub five minutes together. Fishing is something that I can only daydream about. I’ve spent the better part of my free time lately daydreaming and planning for a trip to catch Leopard Trout with Snapper in Alaska this summer. I often use reading and social media as an outlet between what I am doing to think of my happy places. On the boat, in the stream, fingers cradling the belly of a big fish. I have smiled day in and day out seeing all the places Snapper has gone. Last week my heart sank when I saw a post on his Facebook page placed by his dad. It was a heartfelt prayer request informing friends and loved ones that his son, Evan, was fighting for his life. Later I learned that Snapper was in critical condition- a victim of a very senseless crime while spending time fishing for reds and having fun in New Orleans. I have prayed all week. I have hurt for my friend and his family. Last night I learned that he passed away.

I believe it is important to honor the people that have made such an indelible impression on your life. My friend Evan Merrill, “Snapper”, was a friend to so many, just like me. He was one of the kindest and best intentioned human beings I have ever met. I am saddened that his life was so much shorter than it should have been. I will miss my friend.

Here is to you Snapper! May the road rise to meet you. May the rain fall softly on your fields. And until we meet again- tight lines.