There is nowhere on earth you that does not have a place to fish– seems God made it that way to keep men in the pursuit happy. When a batch of my oldest friends put together a guys trip to Kiawah Island this month– I found some water to cast to. Sure, we had lots of bourbon and cold beer, we jibbed at each other with practical jokes, and smoked plenty of cigars on the porch in the evening. But when they all slicked up and grabbed their sticks to play the Ocean Course, I packed my camera and some sunscreen and hiked out to the dock. It was a blustering day with the promise of a strong flood tide. Across the backwater, my fishing buddy, Snapper, skipped across the chop in his pole skiff. Snapper, known by his mother as Evan, has been my trout fishing guide and buddy on the Tennessee tailwaters for some years now. His life has taken him to great waters– those thin mountain streams of his home in Boone, the big Tennessee water, guiding Leopard Trout camps in Alaska, but he is now in Southern nirvana, Charleston. Lucky for me! Let’s go fishing. 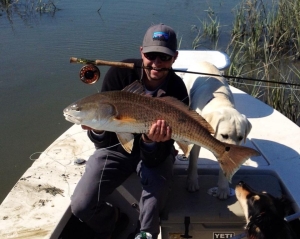 Our first sortie to the banks put me on casts to a bonnet head the size of my thigh, but the in coming tides were to strong for good footing. As the afternoon water showed the earliest evidence of rising, Evan ran the skiff up a creek barely wider than the boat itself. He intensely whipped around tight bends mapped in his mind at full speed, knowing a wrong turn might end up an evening stuck in the mud and a phone call to be rescued. (Remember: this guy is a professional.) We slowed into a broad bend in the creek and mullet began to break. Perhaps it was the red full moon or impeding solar eclipse, but the coastal Savannah rapidly began to fill in and the grass was not as tall as it was in our approach. Evan mounted the platform and I took the bow. We moved in stealth seeking, watching for those bronzy white spotted tails. They could be found at distances beyond a reasonable cast, but were so content on cracking oysters that we could approach them to drop a crab fly across the top of the grass despite the pouring wind. With a gentle flickering strip the reds would take. Slowly stripping #8 line, tip down the fly would set its hook and the dance could begin. I am sure my wife is pleased that I have discovered a new pursuit.

To book a guided trip in the Charleston tide with Capt. Evan Merrill, visit his website: www.flyfishingcharleston.com 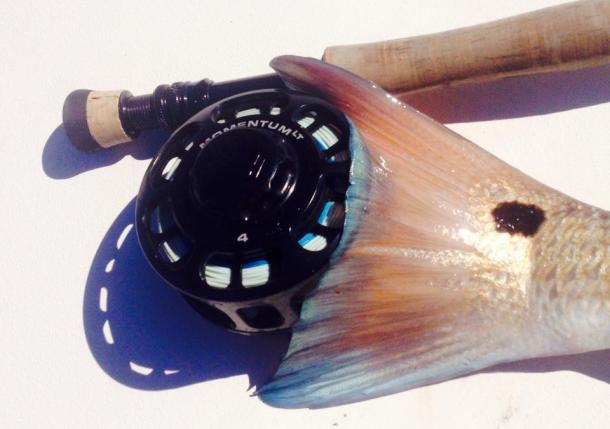